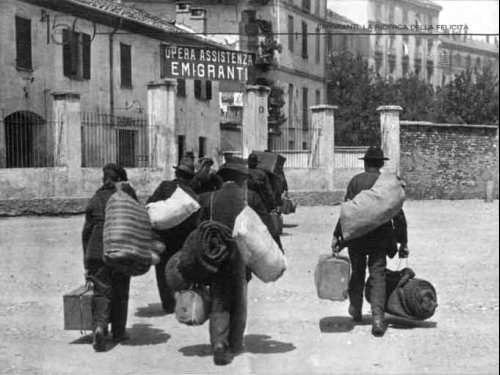 04 Nov Any relative in Argentina?

I know for sure that part of my family, long long time ago, moved to Argentina and to Miami but unfortunately now we’re no longer in touch with them.

Nerina, my grandma, in the 70s flew to the other side of the Ocean to meet those aunties, uncles and nephews and I know for sure that they kept a correspondance in that strange language that is not Italian nor Spanish and that doesn’t follow any grammatical rule but it is a language made of a real and deep need of communication.

The essential language that makes us feel alive and keep relationships alive. When I was a little girl I remember that sometimes my grandparents were talking about these faraway cousins and I’ve always thought this roots’ graft into another land as something fascinating and incredible.

Few days ago uncle Pippo and auntie Teresa told me that a couple of years ago a couple was ringing their bell. Their Italian was quite funny and they were looking for my grandma that unfortunately left us some years ago for a journey where you cannot come back from… Despite their weird look, after some talking, my uncle understood that they were his cousins from Argentina. They were in Italy for a journey, looking for a something they could only find right there were their grandparents left years and years ago, those grandparents they kept a correspondance with.

From 50% to 70% of nowadays population of Argentina has Italian origins so more or less an Italian family on two has someone who left home to go there. In this first year only we have already hosted 2 Argentinian couples who were looking for their roots and family.

Last spring Gabriel and Rosana stayed in our b&b travelling around Italy and they were headed to Corridonia, the small town Gabriel’s grandfather left many years ago to move to Argentina. We wrote a few emails before their arrival and when they arrived we already knew part of their story and the goal of their journey. There was a good feeling since the very beginning.

They arrived to Corridonia by taxy and when they were there they noticed they left the address of the house here at the Standard! What could they do? Gabriel sees a barber shop and decide to go in to calm down his nerves and get a shave. So the story begins. As they are in a small town in Italy the barber knows everything and everyone and a name and few details are enough. After a while they are with the barber in front of the old house of Gabriel’s grandfather… That night Rosana and Gabriel came back to the Standard B&B really happy and they shared this story made of passion, research, land, travelling, love and fortune with us.

Then, a few days ago, another couple from Argentina booked a room here at Standard B&B: Ricardo and Josefina Forani. Before their arrival we didn’t know they were looking for someone of their family but as soon as they arrived they told us that Ricardo’s grandfather was born in Macerata but he lived in Civitanova and during the second world war he left to go to Argentina.

Forani is a very common surname in Civitanova and I would really help them but I didn’t know how. Considering also that I am not big on names and I often also forget the surnames of the people I am with everyday… The night they arrived me and Angelo were having dinner with my parents and I told them about Ricardo and Josefina and my mum told us about her friend who has the same surname. We immediately called her. She remembers that her father used to wrote to some relatives who moved to Argentina but now nobody knows a thing about those letters or those faraway uncles who lived in Argentina… Anyway we arranged the meeting and the following they spent some time together and Ricardo and Josefina told us it was absolutely amazing. Ricardo was really happy and deeply touched and he wrote us a beautiful message on the guests’ book that really moved me.

Being somehow part of this researches even if from the backstage, hosting the travellers, their dreams, memories, hopes sailing from one shore to another of the ocean gives me a real pleasure. Looking for something, looking for the threads that bond us the land we’re coming from it’s always a precious gift because when we go back we can understand the way we’re going to and we can also understand better who we are.

A really big thank you that comes straight from the heart to Gabriel, Rosana, Ricardo and Josefina for sharing their stories with us.

We really hope to host many travellers who are looking for something. It doesn’t matter if it’s the land where the family came from or what else, the important thing is that their eyes and their heart are widely open ans full of will to discover new horizons and growing everyday.

We’re waiting for you @ Standard B&B We are Letizia and Angelo and We believe deeply in hospitality as a value, inside and outside the walls of our bed & breakfast. We love things made with love and passion from cookies to books, passing through pictures and travels. We love to read, to listen to, to learn and looking people in the eyes.